The University of South Carolina Beaufort (often abbreviated to USCB or USC-Beaufort) is a public university serving nearly 2,000 students with two campuses located in the Lowcountry region of South Carolina. The larger "Hilton Head Gateway" campus is located between Bluffton and Hardeeville near Hilton Head Island. The original Historic Beaufort campus is located in downtown Beaufort.

In 1795, a preparatory school and college in Beaufort was chartered as the Beaufort College to serve the families of local planters. Classes began in 1802 and the college reached a prominent status in the community during the antebellum period. The college was forced to close in 1861 at the beginning of the Civil War[1] and the Beaufort College building, constructed in 1852, was occupied by the Union forces for use as a hospital.

The college building was used by the Freedmen's Bureau during Reconstruction and it was an elementary school from 1909 to 1959. In the 1950s, two factors brought about the return of higher education to the Beaufort region. The University of South Carolina sought to expand its reach throughout the state by the establishment of extension campuses and the Beaufort County Higher Education Commission was formed by prominent citizens of Beaufort to bring such a campus to the area. A branch campus of the University of South Carolina was established in 1959 at the site of the old Beaufort College, but the official opening was delayed by Hurricane Gracie. 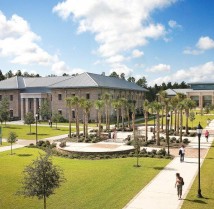